Where Cultures Collide and Towers Rise: The Diaolou of Rural Guangdong

On a recent research trip to Guangdong, I decided it was the perfect time to mix my personal life with my work life as I explored the cities of Guangzhou, Foshan, and Kaiping.

While the ultimate goal of the trip was to explore some of the 1,833 diaolou watchtowers, I had a great start in the provincial capital, braving rushing thunderstorms by visiting two of Guangzhou’s best museums.  The first was the Guangzhou history museum, located in Yuexiu Park above the Sun Yat-sen Memorial Hall, and within a ten-minute walk of the city’s infamous Five Rams statue.  While the current building dates back only to the late Qing, the museum does a fine job of giving the visitor ample background information on Guangzhou’s underrated and overlooked history.  Outside the museum, one can tour a variety of cannons used to try and hold off invaders to the (at the time) walled city.  The cannons were used to fight the British when the likes of Lord Elgin rolled into town and bombarded the city of Canton.  The ground floor gives the visitor a good sense of Guangzhou’s importance as a center of trade for the Maritime Silk Road.  On the fourth floor, hidden behind a globe, is an image and introduction of one of my favorite overlooked historical figures, Yung Wing. the first Chinese to complete an education from a US college when he graduated from Yale in 1854. 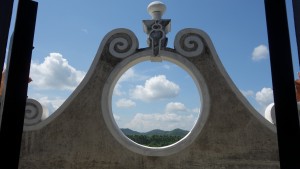 For my next rainstorm, I visited the site of the former Nanyue Kingdom Palace Museum.  This massive museum was only open to the public in the past two years, is still in the process of excavation, and, in my opinion, is the best designed historical museum in mainland China.  In addition to displaying the relics of the foundations of the gardens and irrigation techniques of the Nanyue Kingdom, the museum has an astounding display of unearthed ancient wells.  I felt as if I was going down into some mysterious catacombs as I descended into the well where different layers of dynastic history are on view to the visitor.  Rain or shine, this museum is a definite must-see in Guangzhou!

Just outside of Guangzhou is the city of Foshan, home of the “Ancestor’s Temple.”  It’s in this Taoist temple devoted to the Northern God where one can find an excellent display of “red-haired” Westerners carved amidst the architecture in their floppy hats as they get stepped on and even bitten for the nefarious deals they tried to pull. There are stone pillars showing happy Westerners smiling against them almost as if they are relaxing for support.  Right next to these pillars, there are others showing a much different view of Westerners where the once relaxed Dutchmen have been transformed into a scene of perpetual torture, lifting the entire weight of the pillar up while they squat down.  This change in the depiction of Westerners shows the evolution of the relationship between China and the outside world during the Qing Dynasty. 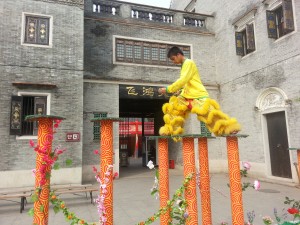 Besides these telling images, Foshan is the spot where I first encountered “lion dancing.”  Originating from martial arts movements, “lion dancing” consists of two people wearing a lion outfit, completing dances in an amazing display of coordination and acrobatics.  The dancers take part in competitions, festivals, weddings, and joyous occasions.  Many of them are middle school and high school students, taken away from a single track towards the “gaokao” college entrance examination, and given to another single track of feline dancing and ripped muscles.  There are lion dance performances each day at the Ancestor’s Temple.  Depending on the size of the red envelope visitors “feed” to the lions, they will then “regurgitate” a fortuitous wish through their mouths.

All of these sites and wonders make my visit worthwhile in themselves; however, the diaolou watchtowers still await.  After leaving Guangzhou and Foshan behind, our caravan of all ages head to Kaiping to check out Guangdong’s contribution to UNESCO. 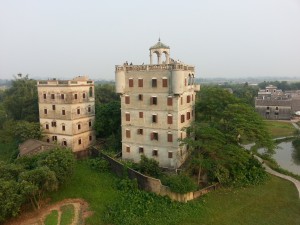 Only achieving world heritage status in 2007, the diaolou clusters in Guangdong seem to be anomalies to the eye at first glance. Each and every one of them is so distinct, especially at the tops of the towers where they mimic sentimental memories the owners may have had of Western rooftops in the various countries they made their fortunes.  According to UNESCO, the different types of diaolou towers can be divided into three categories: “Communal towers built by several families as a temporary refuge, residential towers built by individual rich families and used as a temporary refuge, and watch towers.  There is no appropriate English word I can use to fully describe or name these “diaolou,” so I’ll stick to the Chinese pinyin spelling of the Chinese for 碉楼。I have visited the diaolou on numerous occasions, and the clusters are close enough together to be able to visit and explore the UNESCO-protected towers, as well as the hidden and unlisted ones on the seat of a bicycle.  There is even a bike-path that has been developed in the area specifically for this purpose.

The best place to start when exploring Kaiping is in the town of Chikan.  Like visiting the set of an old TV Western, the first feeling is one of being surrounded by the surreal.  The “old” buildings from the Republican era on the main street of Chikan only date back to the Republican era, but they reflect the area’s early fascination with the West.  Aptly nicknamed “European Street,” when standing across from main drag, the style and architecture in the town also reflect how this largely undiscovered location was once a thriving hub of trade and overseas Chinese spending their wealth in order to outdo one another and contribute back to their local communities.
After Chikan the next stop is to Li Yuan, a gigantic garden and mansion complex built by returning emigrant and businessman Xie Weili.  Mr. Xie’s story is the finest example of the type of people who constructed the diaolou towers and the surrounding Western-style houses in the countryside.  Born in the USA, Mr. Xie made his fortune in the pharmaceutical trade. In 1926, he was ordered to return to his ancestral home of Kaiping in 1926 to construct a garden and mansion. With styles that mimic classical gardens of Beijing, Suzhou and Hangzhou, as well as architectural styles of the US, Europe, Japan, and Southeast Asia, the 19,000 square meter compound seems like something out of Europe…or Asia…or…well, just Kaiping. Besides the architecture and grounds of the Li Yuan complex, there is also an excellent museum devoted to the history and mystery that surrounds the diaolou tower phenomenon concentrated in the Kaiping area. 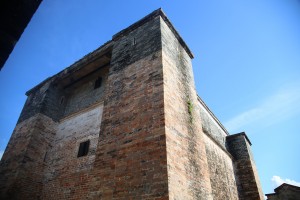 After Li Yuan Garden complex and mansion, it’s off to the other surrounding villages.  Because we have a car, the going is easy.  We visit the major diaolou clusters including the oldest documented diaolou, in Sanmenli 三门里 village, which dates back to the Ming Dynasty.  We also drive to Jinjiangli 锦江里村 where we can see the “king” of the diaolou towers, the infamous “Ruishi Lou” 瑞石楼。Whereas many diaolou towers may have a “head,” “neck,” or “body,” Ruishi Lou has all the parts:  head, neck, shoulders, and body.  Climbing to the top of the Ruishi Lou the visitor will be able to look out at the countryside from all four sides after walking through the shrine worshipping the ancestors of this building.  Off in the distance, my girlfriend, Radium, sees a complex of Westernized mansion structures that look haunted and uninhabited.

“Oh…I want to go there,” Radium says with her talent for finding the undiscovered. 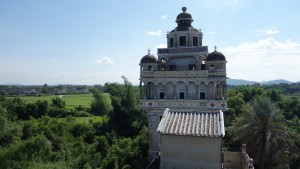 Sweat pouring off our bodies, we descend the steps of the king of the diaolou and gather back at the seven-seat passenger van to turn on the air conditioning before the caravan of gentle-ladies gets in.  We make the three-minute drive over to the neighboring village on narrow roads floating amongst growing rice paddies.  As we pull into the small village, there is a circle of men sitting underneath the shade of a gigantic tree.  In front of the village lies a small pond, typical of the villages in the area in keeping with local “feng shui” practices.  The buildings stand in one perfect line next to the pond, gray and somewhat haunted in their appearance.  Separating the buildings with just enough space to walk amongst them are small, straight, alleys, somewhat reminiscent of hutongs. The alleys incline slightly as we walk inside to the back of the village so that any water runoff will be channeled out.

Our destination is the cluster of “haunted” mansions in the back of the village.  When we arrive, we knock on the door, and a kindly man in his 70s named Mr. Huang lets us take a look into his home.

Although the weather is stifling, it is slightly cooler inside Mr. Haung’s house, and there’s not a bead of sweat upon his forehead.  All of the materials used to construct his house were produced abroad.  There are blocks of wood hanging on the ceiling that were once used as ceiling ornaments which could rotate for show.  His wife sits inside and continues to make lunch while a young boy who is most likely his grandson watches television.

We stay and talk with him for a while and he tells us about many of his relatives who are living abroad.  The tradition of overseas Chinese continues.  When asked why he wouldn’t want to go abroad, he just smiles and looks around the room.   After talking with him for a few more minutes, he says that there were people from the tourism industry who came to his house in the past, but he never wanted to have his home be a designated “scenic” spot.  It’s still very much his home, and still very much his community.  Fortunate enough to be able to catch a glimpse of Mr. Huang, his family, and his home, we say our goodbyes and continue on our way back to Guangzhou, through the passing rainstorms, blue sky, and thunderheads above.