Spirited Away to Taiwan with BSN 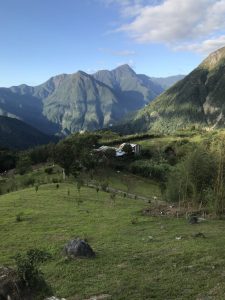 This year, The Hutong added our second program outside of mainland China with a pioneer group from the British School of Nanjing, heading to the temperate coast of Taiwan.  It was a trip that had students focusing on the area’s unique history, geography, nature, and ethnic diversity.  Although the area of Taiwan is small in size, the inaugural program provided plenty of physical challenges to the students as they tested themselves river tracing up rocky valleys and hiking to remote villages.

The trip started off with the group visiting the largest and most famous of all the night markets in Taipei City, the Shilin night market.  It was here that students were thrown in the deep end immediately as they broke into small groups and were given a budget to explore the culinary treasures that Taipei has to offer.  No trip to Taipei would be complete without a helping of “coffin bread” washed down with a smooth glass of fresh milk tea!

The next day the group left the capital and took the two-plus hour train ride to Hualien.  This trip took us through the surrounding countryside of Taipei, as well as the industrial area on the outskirts.  Surrounded by mountains, we were given an unexpected surprise when the train shot out of a tunnel and the endless Pacific Ocean suddenly appeared.  As the train darted through tunnels and curved around cliffs, students took picture after picture, spotting the mysterious “Turtle Island” in the distance.  This island was once a home for fishermen, then the locals were relocated and a military base was set up in the past.  Now it is a Nature conservatory. 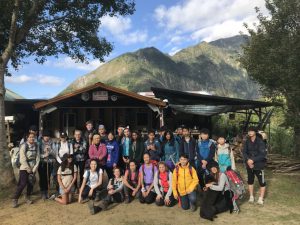 Upon arrival in Hualien, we were met by our wonderful local partners and led to the nearby beach for an afternoon of beach clean-up activities.  Students worked for about two and a half hours next to the backdrop of waves crashing relentlessly upon the sandy shores.  The waves were unusually high and dramatic as if Mother Nature was reminding us just who was boss.  When time was up, so were the garbage bags, as the BSN students had surpassed all trash-collection expectations and filled up all the bags that were provided.  That evening, after a good hand-rinsing, the group filled their bellies at an all-you-can-eat Taiwan style hotpot restaurant before heading to the campsite where we would be living for the next two nights.

The third day provided the students with an experience known to all in Taiwan, but to none in Nanjing—river tracing.  A combination of canyoning, hiking, and swimming, river tracing would be one of the highlights of the trip.  As students put their wetsuits, helmets, and life jackets on in time for the safety talk, the instructors from the local ethnic group prepped them for the challenges that lay ahead of them that day.  River tracing was different from anything any of the participants had done before.  They climbed over and under large boulders in the water, swam in the fresh mountain stream, and helped one another past obstacles. 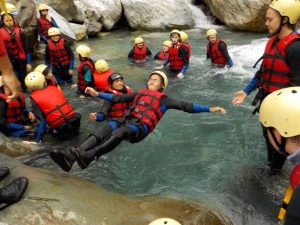 Over the next two days the challenges kept coming as we hiked in the Taroko Gorge region to a small Taroko ethnic minority village called Datong 大同。Carrying our backpacks the whole way, we were greeted with breathtaking views of the ocean, as well as mountains that made us wonder whether we were in Switzerland rather than Taiwan.  At the Taroko guesthouse, the hostess taught students various expressions in local dialect and sang a song that villagers used to motivate themselves as they walked up the mountain each week.  The group sat around listening to her stories of changing lifestyles in the village. We enjoyed her tales from the past as well as the fresh and hearty wild boar.

The trip ended with the group heading back to Taipei for one last venture into history to the Palace Museum in Taipei.  Students broke into small groups to create scavenger hunts for their classmates in one of the final activities of the program.  After the palace museum, the last meal brought us to Auntie Vicky’s beef noodles. Across from a small art district in a re-purposed wine factory, students were treated to one of Taiwan’s most well-known local specialties.  As we entered the small family restaurant, Auntie Vicky greeted us with two platefuls of chocolates.  When the broth was served she put her hands to her lips and blew the group a kiss with a giant, “I love you,” to send the group on its way back to Nanjing.