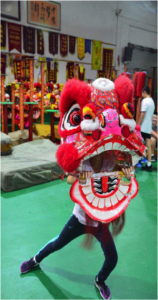 This fall, The Hutong Education led The German Swiss School and The International School of Shenzhen to Guangdong Province. Our Guangdong program focused on two areas: Foshan (佛山) and Kaiping (开平). In Foshan we visited the town’s Ancestral Temple (祖庙) where students learned about aspects of  Taoism, Buddhism (the religion from which the town’s name is taken), and Confucianism. They also learned about the folk hero Huang Fei Hong (黄飞鸿), and the martial arts legend Yip Man (叶问), who both hailed from this area. After an afternoon spent absorbing local traditions and culture at the temple in Foshan, students got to show their own skills in a variety of disciplines from gongfu (功夫) to lion dancing (狮子舞), instructed by masters at the Huang Fei Hong Lion dance training centre. They tested their hand at pottery at the 600-year old Nanfeng Kiln (南风古灶). From there, we traveled to Kaiping with its famous UNESCO-listed Diaolou (碉楼): great towers, with a notable mixture of eastern and western features, rising up over the rice fields and visible for miles. Around Kaiping, students cycled between Diaolou clusters learning not only about the Dialou, but also about social, cultural and economic factors affecting the area.

A single shot echoed through the cavernous hall. It hung in the humid air, thick with tension and anticipation. The silence intensified and two lions approached.

Their steps soft, their expression inquisitive, they were almost close enough to touch. We regarded them, uncertain, not quite knowing what to think or what to expect. Then, the silence shattered as the drums and the cymbals burst to life.

The lions were swirls of colour and energy, leaping, twisting, bouncing, reaching. The frenetic beat and cymbal clashes became louder. The lions sprang farther and bounded higher driven on by the drumming. 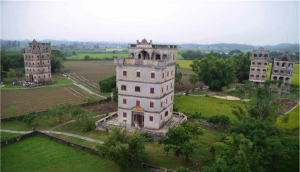 A clack killed the cacophony and that same ominous silence returned, our eyes rested on a solitary, now serene, lion perched high above us looking down, watching us in stillness as we looked back at him.

Sitting here, we were transported into the past, a world of banditry and prosperity, of arrivals and departures, of painful separation and joyous reunion. From the top of the Mingshi Diaolou(铭石楼), you can see for miles. The ornate designs filled us with questions about the experiences of the emigrants from this area and the extent to which their new lives far away affected not only their taste, but their world view as well. 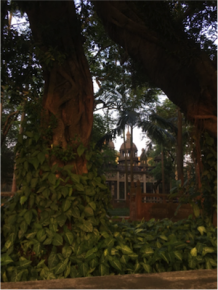 We thought of push and pull factors, of what led people to leave this area in such numbers, and what led them to return. We thought of the families left behind by those who ventured so far around the globe in search of fortune. We thought of the rife banditry here during the Ming dynasty, which led to the building of the first Diaolou (碉楼).

The golden haze of dusk sidling through the leaves, coupled with the birdsong, added a dreamlike quality to the early evening at Liyuan (立园). The sight of students telling stories inspired by the formidable Diaolou (碉楼) and their former residents led us to think of the past, to feel fortunate that our enthusiasm had reawakened the ghosts of those who played in this garden, and that we were privileged enough to perceive such harmony in a place that is similar to no other.