While the weather gods may not have shone favorably on the Tenth Graders from Beijing City International School this September, they never let the rain and wind dampen their spirits. As the group exited the Xi’an train station into the light morning drizzle through the sea of umbrellas, our intrepid adventurers caught a glimpse of the majestic city wall welcoming them to the ancient capital of Xi’an. 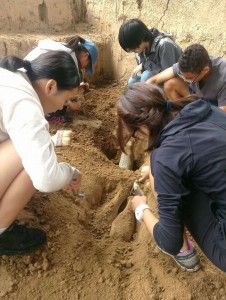 Traveling to the birthplace of Chinese civilization, to a region teeming with historical relics around every turn, we began our journey through time at Han Tombs that date back even farther than the World Famous Terracotta Warriors. Students had the opportunity to meet with the archaeologists who have devoted their lives to uncovering the mysteries of the ancient civilizations who once put the Yellow River Valley at the forefront of human development. The archaeologists explained the steps they take to protect and preserve the relics as they excavate them from the ground before letting our students drop down into the excavation pits and press their own luck! The students jumped right in, allowing the yellow earth to cover their jeans and cake underneath their fingernails as they began to uncover clay figurines buried below. Getting down and dirty to excavate their own treasures gave the students needed perspective heading into the next day’s visit to the Terracotta Warriors.

One of the biggest highlights of any trip to Xi’an was that evening’s excursion to the famous Muslim Quarter night market. As the neon lights glowed and the barbecue smoke wafted through the light drizzle, we entered the bustling street with the feeling of being transported to another place entirely. Many of the storefronts and shop owners of the Muslim Quarter trace their lineage back to ancestors who made their way to Xi’an via the great Silk Road, back when it was the most populous city in the world. While the night market has become more commercialized via tourism over the past decade, this legacy still lingers and harkens back to a much different time.

The next morning began bright and early as our intrepid gang set off to spend the day with the majestic Terracotta Warriors. Our first destination was a pottery factory where we learned how the real warriors were made over 2000 years ago before getting a chance to sculpt our own personal terracotta figurines. Then, students set off on a classic scavenger hunt around the grounds of the Terracotta Warrior Museum to uncover some of the hidden secrets of Emperor Qinshihuang’s burial grounds. As the rain eventually forced us indoors, we split up into separate groups for our Terracotta Warrior Stakeholder Interest Game. Before we left Xi’an, students were given different roles and were told to analyze whether to excavate Emperor Qinshihuang’s actual tomb, through the eyes of the actual stakeholders involved. Students represented stakeholders from across civil society including academics, journalists, local tourism board members, local villagers, government representatives, international NGO’s, and even the late emperor’s spirit himself! Lively debate balanced the yearning to learn more about our past with the need to make sure excavations don’t destroy the priceless artifacts and the history buried beneath. Eventually it was agreed upon that since we are only forty years removed from the discovery of the tomb that had laid undisturbed for almost two millennia, it would be prudent to wait a little while longer to guarantee that our technology is sufficient to excavate the tomb safely and that a bit of patience was necessary.

The final day in Xi’an was to be capped off with a bike ride along the top of the old city wall but the rain stubbornly had other plans. Taking this letdown in stride with nary a single complaint, we climbed the wall anyways and strode along the wall through the drizzle with many a soggy selfie being snapped along the way. The persistent rain, extremely uncommon in North China, would have gotten most groups down, but the determination of these 10th graders to enjoy their time in the company of friends on this program was beyond impressive and a testament to the strength of the community being nurtured and empowered at BCIS.