This year’s Hutong Fall season marked the first time students from UWC Singapore took a trip to China’s Jiangnan area, combining the sites and skyscrapers of Shanghai with the serenity and soul of Hangzhou’s beautiful West Lake. The program’s primary focus was on language immersion and practice. Students were given the chance to practice speaking and writing Chinese throughout various interactive activities, with with school exchange students and with locals they encountered throughout their Jiangnan Journey. 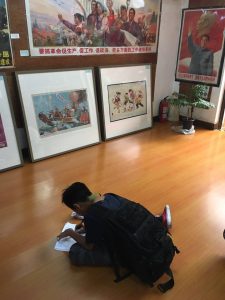 The program started out on Day 1 with students visiting Shanghai’s French Concession. Students received Hutong handbooks that would accompany them throughout each activity and site they visited. Each day came equipped with new vocabulary words for students to practice and use throughout the day. As we visited the sites on the historic walking tour on Day 1, students filled in their handbooks with vocabulary words and with questions that pertained to each area. We visited Shanghai’s Xintiandi, the Shikumen Open House, which portrays how life was one century ago. We found a hidden Russian Orthodox Catholic Church and even a private Chinese language school called Hanyuan which is housed in a historic mansion.

Day 2 had students practicing their bargaining skills nearby the Yuyuan Garden and City God Temple. Students also had the chance to learn which Taoist God corresponded with their birthday. After the evening meal at a nearby Hunan restaurant, we returned to the hotel where students began working on their Chinese Propaganda Poster Art project, inspired by the artwork and messages they saw earlier in the day after visiting the Propaganda Poster Art Center. Each day students would pair up to add content to the their posters, creating images accompanied by corresponding Chinese text. 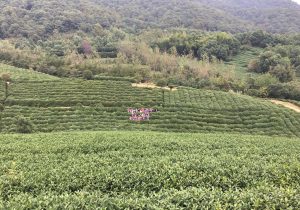 On Day 3 we departed from Shanghai for Hangzhou. We stopped off in the beautiful watertown of Zhujiajiao where students broke up into small groups and tried ordering lunch for themselves in Chinese. Some students spent the time in Zhujiajiao exploring the lanes and nearby canals, while others took the opportunity to take photos dressed in ancient Chinese costumes. After driving to Hangzhou, our first stop was the enormous Lingyin Temple where students picked up their artists’ pens again to sketch the enchanting Buddhist carvings from the grottoes nearby the temple.

Day 4 was the most active day of the trip, with students visiting the Shenbao drink company’s laboratory to learn about drink manufacturing in a major business in China. Afterwards we went tea picking Dragon Well tea leaves in the beautiful tea farms that dot the Hangzhou countryside. Probably the most exciting activity of the trip, the afternoon was full for the UWCSEA participants as we visited the White Horse Middle School for an afternoon of school exchange that included: team-building games, American football, pottery classes, a tea ceremony, musical performance, kung-fu, and even a psychology class. Many thanks are in order to the participating school in Hangzhou for sharing local Hangzhou culture and knowledge with our Singaporean students. 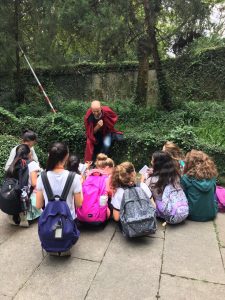 Day 5 had students exploring the poetic West Lake. After a morning visit to the West Lake museum to learn about its significance and history, we took a boat to the Fairy Island in the middle of the lake for sketching and exploring. In the afternoon we visited the Yue Fei Temple where students met with historical figures from Hangzhou’s past and acted out their stories for their classmates. The evening gave the students another chance to practice ordering dishes in Chinese on their own once more, all with a finish at the local Dairy Queen!

On Day 6 and 7 after our return to Shanghai, we visited two museums: to learn about the city’s art and history. Students pieced together Soong Ching-Ling’s past, creating their own versions of her life story. In the Shanghai Museum students used Chinese to introduce artifacts to one another. The final site we visited on the last day was the Pearl Tower. From the glass floored sphere in the tower, students enjoyed a great vista of the city of Shanghai. We reflected upon the adventures encountered during this visit  to China. Safe and sound, we ended our journey at Pudong Airport, all with a happy 下次见.