The Shikumen of Shanghai 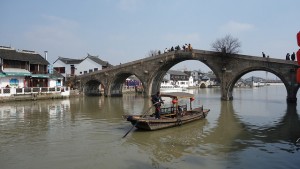 Tom Cruise pumps his arms up and down, his back straight, he runs at breakneck speed through Shanghai, crossing over a waterway and the Ming Dynasty era bridge known as the Fangsheng (“Live Forever”) Bridge. Red lanterns hang from the covered walkways on either side of the bridge. The locals seem to be moving in slow motion compared to Mr. Cruise, whose pace might be explained by the explosive device implanted inside of his head. Time is of the essence. The showdown with Phillip Seymour Hoffman is about to ensue where Mr. Hoffman, the villain, will have his head taken off (spoiler alert for those who care) by a semi-truck at full spe…

CLICK…I turn the TV off in my room in the Kingtown Hotel, Shanghai. A semi-truck in Zhujiajiao? I don’t think so.

Amazingly, the action sequence has cut from Zhujiajiao to downtown Shanghai in a matter of seconds. The final action sequence in Mission Impossible III is supposed to take place in Shanghai, but while the village of Zhujiajiao 朱家角 is now a a stop on every Shanghai visitor’s itinerary, the satellite water town is well outside of the city center.

On a recent research trip to Shanghai, I visited Zhujiajiao, its many waterways, and ancient bridges, as well as had a stopover lunch of simple noodles with a fried egg. I had the good fortune to walk at my own pace and was not overrun by either hordes of tourists or a frantic head-exploding Mr. Cruise. 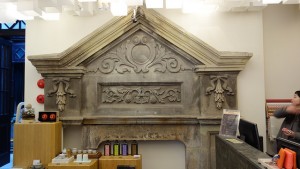 As interesting as the water town was, it was the “Stone Archway” (石库门 shikumen) houses which drew me to Shanghai. The remaining stone archway architecture in Shanghai is mostly located in the former French Concession. The Shikumen lie within the confines of “Longtangs” (弄堂) or alleyway housing. The doorways of the houses are typically outlined by gigantic stone archways, hence the name, and are designed in the baroque style.

Walking through the former French Concession it’s easy to see the Western influence in the architecture. In order to accommodate the refugees fleeing from the “Small Sword Uprising” in the countryside during the 1850s, “Longtangs” were constructed to allow large numbers of people to live in a confined space. 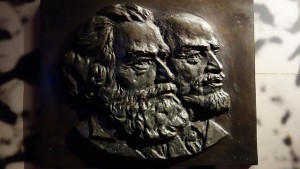 Images of Marx and Lenin in today’s Shanghai

From the 1840s to the 1960s, about 60% of Shanghai’s residential areas were composed of “Longtangs,” making them akin to the Shanghai version of the Beijing hutong. “Longtangs,” in my mind are the centerpiece of “Old Shanghai.” As with the hutongs in Beijing, however, many of the “Longtangs” have been razed to the ground in order to make way for shopping malls and higher priced real estate as described by experts form sell house fast atlanta.

The Shikumen Open House Museum  near Xintiandi showcases the development, growth, and preservation of the remaining “Longtangs” and the precious Shikumen within. I was the only visitor to the museum the day I went. I could see a gigantic shopping mall directly across the street. Next door to the museum, I was able to get a taste of “Red” history when I visited the Memorial Hall for the Site of the 1st National Congress of the CCP. 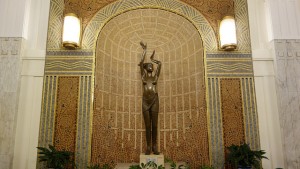 After a brief visit with Marx and Lenin, I leisurely explored the rest of the French Concession, discovering many buildings protected under the somewhat generic banner of “heritage architecture.” My absolute favorite was the street of 皋兰路, where I discovered a former Russian Orthodox Church built in the 1930s but which now houses two private Western restaurants. There is more to Shanghai than just The Bund and Nanjing East Road shopping district.

The French Concession was fascinating with its architecture, hidden alleyways, and small eateries. I even managed to have a pleasant cup of tea in a wonderfully preserved heritage architecture house that currently hosts a Chinese language school called Mandarin School. Although the director, Song Yingna, is originally from Tianjin, she has managed to lead a comfortable lifestyle amidst the hustle and bustle of Shanghai. So, watch out next time you’re in Shanghai, raise your head, and look for the stone archways as you stroll through the French Concession. Just keep your eyes peeled for a half-mad Scientologist whose head may or may not explode if you bump into him.