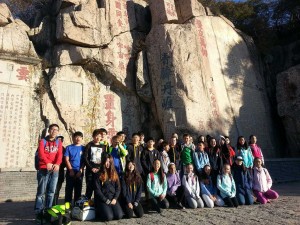 This year’s Fall program with The Nanjing International School was The Hutong’s inaugural trip to Shandong. Home of Confucius, Shandong also hosts one of the most holy spots of Daoism: Mount Tai, a place of worship for over 3000 years.  At the base of this luxuriously wooded mountain lies the Dai Temple, graced with scores of ancient steles commemorating emperors’ visits throughout China’s dynastic history.  Traditionally, emperors would pay homage to and worship Heaven at the Dai Temple prior to making the ascent to the peak.  But while the emperor most likely had a retinue of servants to carry him up and support him throughout the breathtaking journey to the top, all we had was each other, our own two feet, and granola bars.  Unlike the emperor, we were not looking for the secret to immortality, nor were we looking to worship Heaven.  What we did find was a different and very Chinese experience, both at Mt. Tai, and at the Dai Temple. 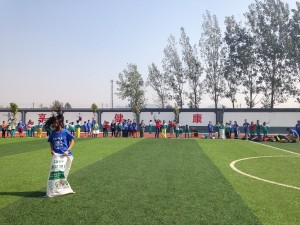 The NIS students created their own memorial steles interpreting the Song Dynasty extensive mural in the main hall of Tai’an’s ancient Dai Temple.  The mural depicts the Daoist God of Mt. Tai as he ascends and descends the mountain.  There is no text accompanying the images, and students were tasked with creating their own versions of the story.  Split up into small “disciple groups”, each one representing one of Confucianism’s “Five Constants” of Integrity, Rites, Knowledge, Benevolence, and Justice, the students collaborated to create five different versions of the Daoist God’s mural.  For five days, they explored sacred pathways and sites, meeting with locals in what many Chinese consider to be the country’s “friendliest” province, Shandong. 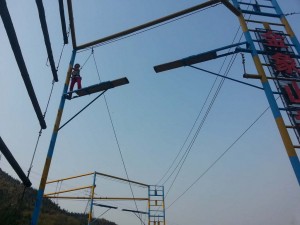 The battle of personal physical challenge is a major one to overcome during the hike up Mt. Tai, and NIS students played the role of good eggs, willingly meeting this challenge, along with other physical, and intellectual trials throughout the duration of the program.  They also faced the task of working together on leadership and team-building activities at the Golden Elephant Outdoor Center.  They participated in activities involving group communication and trial and error.  Students competed in spirited potato sack races and conducted morning exercises during a fulfilling school exchange with Xie Ma Ting Elementary School near Qufu’s Shimen Mountain.  The exchange culminated with students creating a gigantic mural by spreading large cloth banners on the ground to paint pictures that combined elements of NIS culture along with local Chinese culture as well. 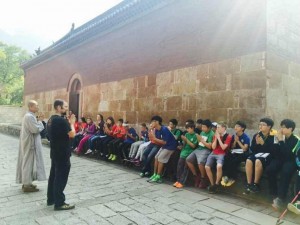 Students went the extra “li” 里 in this program, fulfilling the IB learner profile role of being inquirers as they asked questions wise beyond their years when we participated in activities at temples devoted to Confucius, Daoism and Buddhism.  From the start of the trip when we visited the largest and most famous Confucius Temple in Qufu, to the Dai Temple in Tai’an, and finally on the last morning when we explored the UNESCO Buddhist Lingyan Temple on the backside of Mt. Tai, accompanied by one of the resident monks, students were able to form a clearer picture of China’s three longest-standing schools of thought and religion.  Through interactive activities at all of these sites, and through the sparks lit by their own inquisitive minds, NIS students experienced first-hand the wisdom of Confucius’ famous words: “I hear and I forget. I see and I remember. I do and I understand.”