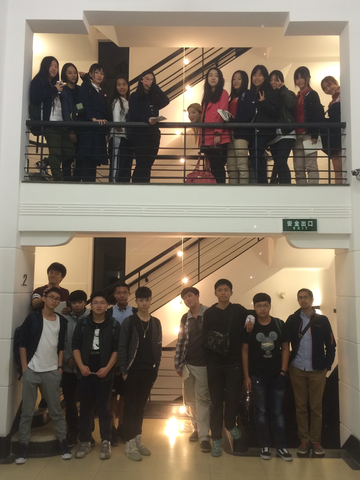 This year marked Nansha College Preparatory Academy (NCPA) and The Hutong’s first arts-focused trip to Shanghai.  In the previous two years, The Hutong has organized arts programs in Beijing for NCPA, but this year they chose to travel to China’s financial district to explore the plethora of state-run and private art museums, in addition to art districts and an exciting hands-on workshop.

After arrival to Shanghai, the group wasted no time dilly-dallying and went straight to the commercial arts district of Tianzifang 田子坊。Slated for demolition in 2006, Tianzifang was “saved” after artists moved into the historical shikumen 石库门 to open up studios and galleries.  Spearheaded by the famous oil painter Chen Yifei, who took over two abandoned factories to make way for his studio, Tianzifang became a small haven for artists for a short while before becoming commercialized with shops, and boutique galleries.  Despite the overabundance of tourism in the area, there are still artists in the Tianzifang area who make maximum use of minimal space to create and sell their works of art.

The first museum that we went to was the Rockbound Art Museum.  Housed in a gorgeous art deco building constructed in the 30s for the Royal Asiatic Society, the RAM gave students a glimpse into the world of Felix Gonzalez-Torres and his minimalist art.  As students explored the space, they sketched what came to mind and later gathered in a room where thousands of liquorice candies lay spread out on the floor making the shape of a rectangle.  As students picked the random pieces of liquorice from the rectangle, making it “interactive”, they engaged with each other about the controversial and thought-provoking question of “what is art?”  Is it something that causes transformation? Is this simply a collection of candies on the floor?  What is the meaning behind the piece itself? Is the piece affected by the aesthetic beauty of the space? 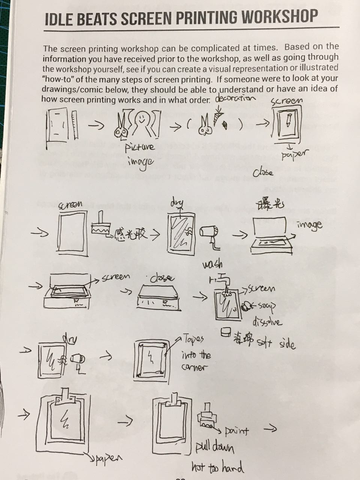 Students had many more chances to ponder on these questions and more on day two of the program as we visited three of Shanghai’s best museums:  the Shanghai Museum, the Power Station of Art, and the Yuz.  The first of the three gave students a chance to get closer to their ancestors and the history of Chinese art.  Pieces in the museum dated back thousands of years and provided ample fodder for sketching in their Hutong handbooks.  The second of the three museums was the most ambitious, the Power Station of Art.  Living up to its name, occupying a massive space that was once a power station, the PSA was holding its Biennale during our visit, and students were not able to see all of the works in the gigantic building during the allotted time.  One of the installation pieces had the visitor entering into what seemed to be a massive crashed airplane that led to a tunnel of subterranean journeys through beehives, volcanic Martian landings, alien babies, and rocky paths.  The installation itself was so massive and varied that some of the students in our group chose to repeat the journey multiple times.  The final museum, the privately owned Yuz Museum gave students the opportunity to explore a former airplane hangar turned into art space.  The exhibit on the second floor contained numerous screen prints from Andy Warhol, a foreshadowing to the following day’s workshop that would have students creating their own screen prints in small groups.

We chose to participate in the wonderful screen printing workshop “Idlebeats,” in order to complete this project.  Started as the brainchild of Gregor Koerting and Nini Sum, Idlebeats gives participants the opportunity to create their own screen printing designs based on illustrations and downloaded pictures.  The point of the project, for this particular day, was to have students understand the entire screen printing process in a cooperative atmosphere.  Separated into four groups based on the four museums we had visited on the previous two days, students would work together to create four distinct images based on consensus.  Housed in the basement of an apartment complex, “Idlebeats” gives the impression that one is about to embark on a secret adventure.  After walking downstairs, Gregor and his partner for the day, Olivia, gave us a tour of the surprisingly spacious area.  Students left their bags in the back room that also functions as a “roller disco” at least once per month.  Filled with roller skates and a turntable against the wall, one could almost hear echoes of a DJs calls to dance as we put our bags on the floor. After providing us with a demonstration of the many steps of the screen printing process (best presented pictorially as an illustrated “how to” in one of the students’ handbooks), the four groups patiently set to work creating their images.  Students used their phones to send pictures to Olivia where they would be printed out and used on their screen printing.  Others sketched and cut out paper to add onto the images.  Three of the groups decided to create double layered screen prints, while one group went with a simple single layer.  Although the process itself was hard to work with, the students persevered and paid so much attention to detail, only as art students can.  The ending result had each individual student leaving “Idlebeats” with a poster-sized version of their original screen prints.  Many thanks to the patience and diligence of Gregor and Olivia for helping students work through their challenges and giving each and every one of them the chance to be part of the process. 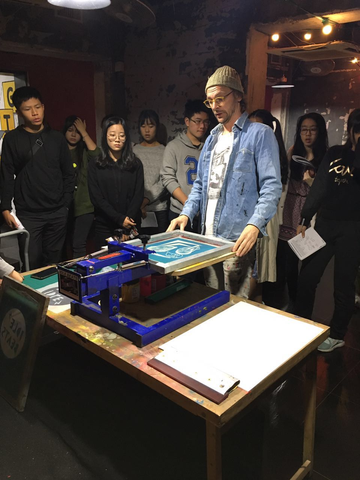 The final afternoon and evening gave students the chance to stretch their legs and minds as we explored both the M50 art district and the 1933 former slaughterhouse.  Filled with galleries, studios, shops, and cafes, M50 was very reminiscent to the 798 arts district in Beijing.  Although much smaller than its Beijing counterpart, M50 was also a former factory much like 798.  Students had the chance to meet with artists in this district as well as being able to look through some of the galleries and have a rest after a long morning of intensive workshops.  After leaving the M50 area, the final dinner was to be in the appropriately named “Bull Market” in the former 1933 Slaughterhouse area.  Prior to dinner, students explored the ramps and staircases that once led to bovine executions.  With appetites worked up, we had our final dinner before heading to Nanjing East pedestrian street.

On our last morning together, the focus was on religious architecture—both Taoist and Christian.  We first explored and sketched the Shanghai City God Temple before heading to the lesser-known Jing Yi Tang.  Hidden away behind the City God Temple, the Jing Yi Tang dates back to the Ming Dynasty and is Shanghai’s oldest surviving church. Students separated into groups and shared highlights, challenges, and “big questions” about the meaning of a work of art. Away from the crowds down a quintessential Shanghai neighborhood lane, Jing Yi Tang was the perfect place for us to have our final reflections about the program.