Guangzhou, the capital of Guandong province, has long been the epicentre of foreign trade within China – trade not only relating to exchange of commodities, but also of new ideas and ways of thinking. A key theme of our trip down south is Cultural Anthropology, looked at by examining both the influence of foreigners working and residing in the area over the past centuries, as well as the migration patterns of local native Chinese.

South of Guangzhou we will visit Kaiping and its villages, where in the latter part of the 19th century and early 20th century, between 85 to 90 percent of the local population migrated overseas seeking employment.  As the Kaiping Diaspora reached the US, Europe, Mexico, and Australia, the returning residents took Western ideas and architecture back with them, as well as accumulated wealth. The returning residents used their newfound riches to find spouses and build tower-fortresses called “Diaolou” which are not seen anywhere else in the world. The UNESCO Diaolou are a standing architectural representation of East meets West, with more than 2,000 towers dotting the countryside.

We will extend our migration theme by examining famous Chinese natives from the area who were influenced by the West. We will visit Foshan, the home of great martial artists such as Huang Feihong, Ye Wen (Ip Man) and Bruce Lee. We will learn the ancient art form of Lion Dancing from the current National Lion Dance Champions. Back in Guangzhou, we will explore the pivotal role that Dr. Sun Yat-Sen played in the birth of modern China, wrapping up our exploration of Guangdong, China’s southern “Tower of Power.” 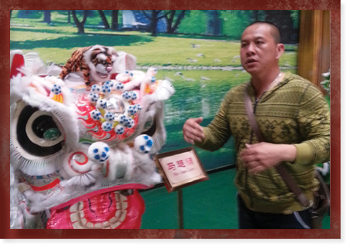 Master Ye is the head trainer at the Huang Feihong Southern Lion Dance Training School. Officially opened in 1999, this training center has grown from 20 to over 100 employees. Master Ye trains wayward youths to use their kinesthetic talents and channels their skills to become Southern Lion Dance champions. The center itself occupies 5000 square meters on the outskirts of Foshan City. Throughout years of competition, the performers of the Lion Dance troupe have earned the center more than 200 trophies. Master Ye is adept at training students and future Lion Dance champions to follow the footsteps of world-renowned martial artist and Lion Dance innovator, Huang Feihong. The training center boasts the world’s largest Lion Dance headpiece as well.