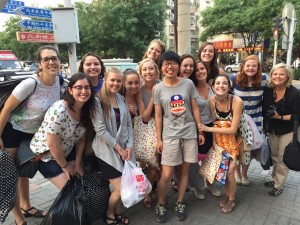 Students from Texas Christian University with The Hutong Education Intern Sunny Gao after a day of commerce in the Central Business District of Beijing.

China is a country full of welcoming, generous people with a rich history and a bright future. All of us read at least 2 books to prepare for our trip to China, and in both there were quite a few history lessons. You can’t talk about China without talking about its history, but only one of our recommended books, China in the 21st Century, 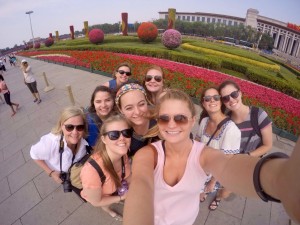 Alyssa Scherr and her TCU classmates posing for a selfie during a day trip to Tianjin.

took a good look at China’s past as well as its present and future. I noticed that this discussion of the present was unusual in my research about China. Now that I’m here, I realize that one of the reasons it’s so hard to talk about China’s present is that the present is more fleeting here than other places. You might think time passes at the same rate no matter where on the planet you are, but in China you’d be wrong. One of the most overwhelming parts of visiting China is truly understanding how rapidly things are changing.

Our hotel is in a neighborhood called a hutong. A hutong is a historical neighborhood of alleyways built inside walls. The courtyards in the Hutongs were originally the homes of high-level officers in the Imperial Army, but when the dynasties ended, the Beijingers moved in. There are many hutongs clustered together in the  district where we are staying. Although these hutongs are historical, they are among some of the most dynamic areas in the city. They draw tourists and locals alike to shop, eat, and experience Beijing culture. But things are changing so rapidly in China that parts of it are completely unrecognizable to our professors who were here just a few months ago! 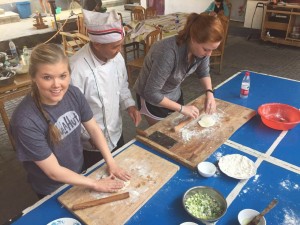 Our Hutong changes from hour to hour depending on which way the wind blows. In the morning, it’s relatively quiet. You can see farmers setting out today’s offerings from their local farms, making deliveries and washing their storefronts. You can hear bikes whizzing by, hoses spraying water, dogs barking, and people greeting each other. At night, it changes from a placid place to buy your groceries to a bright, buzzing nightlife district. There are pizza places, cafes, music spots, jazz clubs, and microbreweries. It’s an amazing blend of traditional and modern culture. All the small store fronts that were setting out produce before now have tables set out with hot pots and spits. There are Beijingers enjoying beer, smoking cigarettes, roasting their lamb skewers at their tables, and laughing together. We have also noticed a number of foreigners like ourselves looking relaxed and confident ordering from the Chinese menus and negotiating the price of their dinners (a common practice in China). The best I can do when we go out is point at pictures on the menu and hope they correspond with the names of dishes I’m so poorly pronouncing.

It’s hard to describe the amount of change that occurs in a day around our Hutong. And even harder to grasp how much has changed not just in the course of a day, but since the Qing Dynasty when the Hutongs first appeared. One of our guides, Josie, who is not much older than the graduate students on the trip, grew up in a Hutong. She can’t visit her old house or go see her old neighborhood because it no longer exists. Globalization and rapid change in Beijing have changed the landscape so much in the last decade or two that it is unrecognizable to the people who grew up here. There is a museum here in Beijing where you can press a button to hear the sounds of the Hutong through the decades. Josie likes to press the button for the 80’s and hear the nostalgic sounds of her childhood home. That really put the speed at which China is changing in perspective for us. Most of us can still go visit our old childhood homes and neighborhoods. Many of our old haunts are still standing. This is uncommon Beijing, although it’s an interesting juxtaposition to see a 1000-year-old building standing next to a skyscraper. 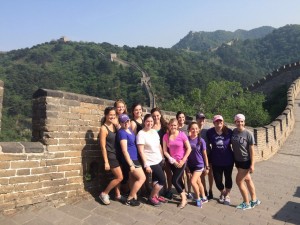 Lastly, being an American in China is nothing short of hilarious. To help fight Chinese stereotypes of Americans, we have all taken a one-hour survival Mandarin crash course taught by another member of our staff, Julie. We greet all the people we see with a friendly, “Ni Hao!”, and we can introduce ourselves, ask their names, and tell them we are American. Some other helpful phrases we’ve picked up are “delicious, thank you, sorry” (that one comes in handy a lot), and “price too high” (also a favorite). We’ve learned the names of our favorite dishes (baozi), we can say “cheers”, and we can successfully pay for our meals. Of course, every time we speak Mandarin we are greeted with a rousing course of laughter from the locals, even when our accents and tones are not completely wrong (which they are… a lot). Sometimes, they laugh really hard, then pull out a camera and start snapping photos. In China, we sometimes feel like celebrities and that the locals are paparazzi. A couple was taking their wedding photos in front of a beautiful fountain, and their photographer took a break from capturing the romantic moment to capture a photo of the foreigners who accidentally crashed their wedding photo shoot. Many locals will trade off cameras jumping in and out of the frame to get pictures with us. It’s fun to be the subject of so many photos, but it’s also funny to think… some of these are going into photo albums that generations past will look at and wonder, “who are those foreigners!”

But it isn’t just that we are funny to the Chinese people. Our experiences have been overwhelmingly positive, but there are always a few changes you have to get used to when traveling in a foreign country. The food is different, the customs are different, and the bathrooms are very, very different. In times where those differences can be overwhelming, our guide and fearless leader Jeremiah reminds us to smile more, and that having a sense of humor about it can change everything.

All of these experiences enhance our understanding of a culture so vastly different from our own, and we learn more and more each day. One day in China feels like 2 days anywhere else. There is just so much to see, hear, smell, taste, and BUY!

Tina is a second-year graduate student in Speech-Language Pathology at TCU.